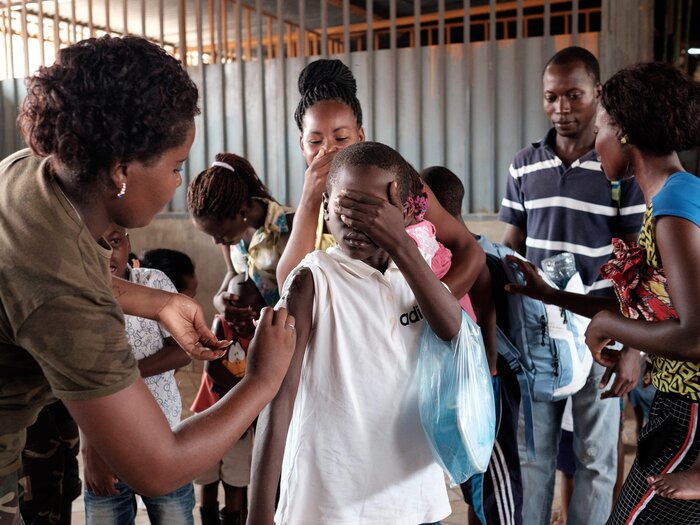 The Angolan military administers yellow fever vaccines at a market in Luanda, the capital city.

The world is in danger of running out of vaccines for a deadly disease: yellow fever. A major outbreak in the African nation of Angola has already depleted the stockpile that world health officials had set aside for emergencies. It’s unclear whether new vaccines can be made in time — even as officials worry that the epidemic could spread through Asia and beyond.

Yellow fever itself is part of America’s history. The mosquito-borne virus was a dreaded killer in the United States through the early 1900s — sparking devastating epidemics in Philadelphia and New Orleans. The disease has been all but eradicated in wealthy countries but remains a serious threat in areas of Africa and South America where it still pops up.

“You first feel a little achy and then there is a sudden onset of fever, the malaise and then there’s these headaches,” says Ilhem Messaoudi, an infectious disease specialist at the University of California, Riverside.

Most patients recover within a few days. But in about 1 in 5 cases the patient gets hit with a second, more toxic phase. Patients develop the jaundice that gives yellow fever its name.

“The white of the eyes turn yellow, your skin turns yellowish and that’s due to the liver failing,” says Messaoudi. “Then you’ll have bleeding usually from the eyes and orifices, then shock and multi-organ failure.”

All within about 21 days. This is the disease that’s been running rampant through Angola since January. More than 1,200 people have been sickened, and nearly 200 have died. And officials say the risk doesn’t end there. Dr. Tom Frieden heads the U.S. Centers for Disease Control and Prevention.

“The bottom line is that this is another example of an emerging infection that poses a threat that may not be limited to Africa,” says Frieden. “I’m worried that yellow fever could spread widely in Angola, and then spill over to the Democratic Republic of Congo, potentially Nigeria and other very populous areas in Africa.”

That opens the risk of spread to Asian countries like China — a lot of Chinese people go back and forth to Africa for work. In fact there’ve already been some cases of yellow fever imported to China during this Angola outbreak. And if the disease does indeed spill over, says Frieden, that’s a serious situation. Because right now the world does not have enough yellow fever vaccine to handle a big outbreak.

“Vaccine is key to stopping yellow fever,” he says. “That’s how we generally stop them, by vaccinating, particularly around cases, so that the transmission can be reduced.”

WHO and other international groups have built a stockpile of vaccines to deal with outbreaks, along with additional supply for a campaign to vaccinate children in vulnerable countries. But they’ve already used the emergency stash to vaccinate more than 5.6 million people in Angola, and now they’re dipping into the supply for the regular childhood vaccinations.

Complicating things further — it’s really hard to do vaccinations in a place with limited infrastructure like Angola, where a seemingly simple task like keeping vaccines cold can be a challenge. The CDC has been trying to help, but Tom Frieden says the yellow fever outbreak couldn’t have come at a worse time because of another crisis: the Zika epidemic. Yellow fever is spread by the same mosquito, and some 800 CDC staffers are now working on Zika. The CDC is “stretched thin,” says Frieden.

The solution? Frieden is calling for greater funding to fight diseases in developing countries. Because in today’s world, he says, any disease is just a “plane ride away.”