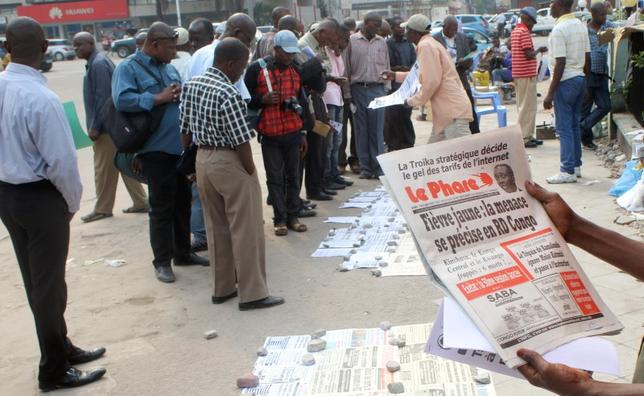 Residents read newspapers with reports of Yellow Fever, along the streets in Kinshasa, capital of the Democratic Republic of the Congo, June 21, 2016.
REUTERS/JEAN ROBERT N’KENGO

Democratic Republic of Congo has almost run out of yellow fever vaccine in Kinshasa, in the same week that the government declared an epidemic of the disease in the packed capital and two other provinces.

Some local people have complained they were denied immunization due to the shortage, despite queueing for a shot. More supplies have been promised, but health officials in the impoverished country say they have to choose between the high cost of flying them in, or a long wait for shipment by sea.

The mosquito-borne hemorrhagic virus is a major concern in Kinshasa, a city of about 12 million people which has poor health services, a humid climate beloved of the insects and much stagnant water where they can breed owing to pour drainage.

Health minister Felix Kabange said on Monday that 67 cases had been confirmed in Kinshasa, Kongo Central and Kwango provinces and that over 1,000 more suspected cases are being monitored. Five people have died from the disease.

The government and international health organizations vaccinated more than 2 million people, about half of them in Kinshasa, between May 26 and June 4.

But there is no more vaccine left, aside from a small number of doses left in reserve in Kongo Central and some being administered by a government agency at Kinshasa’s central hospital, airport and river crossing with neighboring Congo Republic, health officials said.

The agency is charging $35 for the doses it administers, a hefty sum in a country whose gross national income per person is estimated by the World Bank at $380 a year.

Eugene Kabambi, the World Health Organization (WHO) spokesman in Congo, said that the International Coordinating Group on vaccine provision has promised Congo more than a million more doses.

“That requires either a cargo flight, in which case it would come very quickly but cost a lot, or if it’s by boat, it could take a few weeks,” he told Reuters.

The Coordinating Group brings together the WHO and United Nations Children’s Fund (UNICEF) with the International Federation of Red Cross and Red Crescent Societies plus the medical charity Médecins sans Frontières.

The global stockpile of yellow fever vaccine has already been depleted twice this year to immunize people in Angola, Uganda and Congo. It stands at 6 million doses, but this may not be enough if there are simultaneous outbreaks in a number of highly-populated areas, experts warn.

Almost 18 million doses have been distributed for emergency vaccination campaigns so far in the three African countries.

Congo has extensive experience of dealing with outbreaks of tropical diseases and the Ebola virus was first identified in the central African country.

It earned plaudits in 2014 for quickly containing a local Ebola outbreak that killed 49 people in the country. By contrast an Ebola epidemic killed more than 11,300 as it swept through West Africa from 2013.

Of the cases confirmed in the latest yellow fever outbreak, seven were locally transmitted in Congo. Another 58 were imported from Angola, where it began, and two came from remote forested areas not linked to the current outbreak.

Symptoms of the disease include fever, body aches and nausea, although most people recover.

In Kinshasa’s Ndjili commune, a maze of narrow alleys and one of the health zones in the city targeted for vaccination in late May, many residents were unable to receive an injection before stocks ran out.

“Everyone started coming, even from other districts. Near the end we realized that the vaccine was insufficient,” said Murphy Nzuzi, a doctor at a dimly-lit health center in Ndjili with only a few small treatment rooms. He added that fights had broken out among people waiting in line.

In a nearby market where trash collected in a small stream, residents said that some people had received vaccination papers while waiting in line but never got a shot.

“When you present yourself, they give you the card that gives you access to the vaccine, but then there wasn’t enough vaccine for everyone,” said local resident Mama Mavungu.

The current method for making vaccines, using chicken eggs, takes a year. Health authorities are considering using a fifth of the standard dose of vaccine – enough to immunize temporarily but not to give lifelong immunity – to maximize its availability, but no final decision has been made.