According to the CDC, used tires that were shipped to Texas from Northeast Asia thirty years ago were full of “Asian tiger mosquitoes” (Aedes albopictus) and today that’s bad news for Alabama.

Tiger mosquitoes—recognized by their black and white stripes—are one of two species that carry the Zika virus, and they also carry dengue and yellow fever. By the time they were discovered in Texas back in 1987 they were “established populations” that had quickly taken root in the hot, humid Texas climate, says the CDC. Less than a year after they were first discovered in Texas, the U.S. Public Health Service required that all used tires arriving from foreign ports where mosquitoes thrive be fumigated, but it was already too late. When it comes to containing tiger mosquitoes, it’s hard to put the toothpaste back in the tube, and the species found its way east to Alabama in short order.

By 1997 the tiger mosquitoes already spread to “678 counties in 25 states” according to the CDC, and today the news is much worse—especially for Alabama. According to a post by Axios, Alabama is only one of three states where tiger mosquitoes have spread to every single county. As the Axios map above shows, since 2016, we’re covered up in these insects. 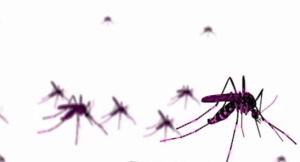 There are a few reasons why this is bad news, but first, it’s important to distinguish the tiger mosquito from its close cousin, the yellow-fever mosquito (Aedes aegypti).  The yellow-fever mosquitoes have received more press because they only bite humans and they thrive in cities. While it’s true that the tiger mosquitoes prefer less populated areas and are just as likely to bite animals as humans, they carry the same diseases as their “yellow fever cousins” and they reproduce far more proficiently.

What this means for Alabama is that the tiger mosquitoes are prevalent, disease carrying-machines that can’t be taken for granted in any corner of the state.

The Alabama Cooperative Extension System (ACES), says the Yellowhammer state is home to some 60 different species of mosquitoes, and they warn, “If mosquito breeding is extensive in areas such as woodland pools or roadside ditches, the problem may be too great for individual homeowners to handle. In such cases, call the organized mosquito control agency in your area. These agencies have highly trained personnel who can deal with the problem effectively.”

People are most likely to be bitten at dawn, in the late afternoon, and at dusk. Covering all skin is helpful but not very practical, so repellants are usually essential. While the ones containing “DEET” are most effective, essential oils like eucalyptus, lemon, and rosemary oil have also shown to discourage bites, and they’re free from the health concerns surrounding products with DEET, especially when used by children. A long list of companies from Burt’s Bees to REPEL now widely sell these more natural, DEET-free products.

Other helpful tips include making sure your home has screens mosquitoes can’t penetrate, draining standing water from birdbaths, kiddie pools, storm-drain traps, dog bowls, and other places where it can collect and stand.

Otherwise, just know that these petulant pests abound in Alabama and take precautions to keep them off of your skin this summer.