The country, the fifth afflicted in what is already the worst Ebola outbreak on record, is a major hub for transportation, business and aid work in the region.

More than 3,000 suspected and confirmed Ebola cases have been reported in West Africa, and more than 1,500 people have died of the virus, according to figures released by the World Health Organization. A separate outbreak has killed at least 13 people in a remote region of the Democratic Republic of Congo in Central Africa.

Guinea notified Senegal on Wednesday that a young man who had been under surveillance there disappeared three weeks ago and may have traveled to Senegal, she said. 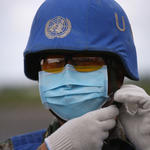 AFRICA
Ebola cases in West Africa may be vastly underreported, WHO says

The student was located at a hospital in Dakar, where he had presented himself the previous day without disclosing that he had had close contact with Ebola victims in his home country.

Tests confirmed that the man was infected with the virus, and he remains under quarantine in “satisfactory” condition, the minister said. Coll Seck appealed for calm and strict adherence to hygiene measures.

Senegal’s announcement underscored the acceleration of the epidemic. Last week saw the highest increase yet in Ebola cases in Liberia, Sierra Leone and Guinea, the countries most affected by the outbreak, the World Health Organization said Friday.

In Nigeria, where the outbreak was believed largely contained, health officials this week confirmed the first Ebola death outside the commercial center of Lagos.

WHO has said that more than 20,000 people could become infected.

Hoping to prevent the spread of the disease, Senegal last week closed its land border with Guinea and barred flights to and from the three worst-affected countries.

Got something to say? Start the conversation and be the first to comment.

Humanitarian workers, however, have advised against such measures. The suspension of flights has complicated the emergency response in Liberia and Sierra Leone, where aid officials have warned of critical shortages of supplies and medical personnel. They have urged African governments to instead screen travelers for Ebola symptoms on entry and departure.

Fear and confusion about the deadly disease have added to the difficulty of containing the outbreak. In Guinea, rioting broke out overnight in a remote southeastern town over rumors that health workers were spreading the virus by spraying a market, news reports said.

There is no vaccine or cure for Ebola, which is transmitted through contact with the bodily fluids of those infected.

Two healthcare workers in Liberia who were given some of the last known doses of the experimental drug ZMapp will be discharged Saturday, authorities in that country said. But it was not clear whether their recovery was aided or even hindered by the drug.

Two Americans who received ZMapp were discharged after getting follow-up care in the United States, but a Liberian doctor and a Spanish missionary did not survive.